The Dead Sea is not only beautiful and unusual geographical region. For us it is also a laboratory of Natureand a source of knowledge of how to take care of body and health. It is a constant inspiration and energy to create amazing cosmetics.
We believe that it is important to know everything about the cosmetics we use every day and we are convinced that information about the Dead Sea can be extremely helpful and enable you to feel closer to the treasure of nature which is the Dead Sea.

Do you know that…?

The Dead Sea is the saltiest lake in the world (345g/litre) It lies in the Jordan Rift Valley bordering with Israel and Jordan. It situated between mountains and high cliffs. From western part there are the Judean Hills and from eastern the Moab Plateau.

It is not everything…

The Dead Sea lies at the lowest point on the Earth about 427 metres below sea level. It is 377 m deep, 76 kilometres long ( in its longest part) and 4.6-16 wide. The surface of water is 1027 square metres . The shore line is straight except the part of the Lisan Peninsula dividing the Dead Sea into two parts: the northern one which is deeper and into the southern more shallow one which is about 6 kilometres deep. The Jordan river flows into the Dead Sea from the north and from the other parts other streams flow into the sea. The Dead Sea does not have an outflow. 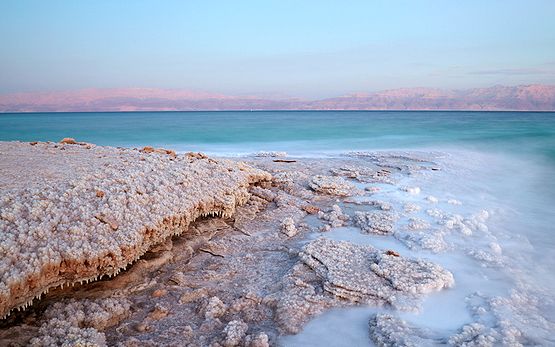 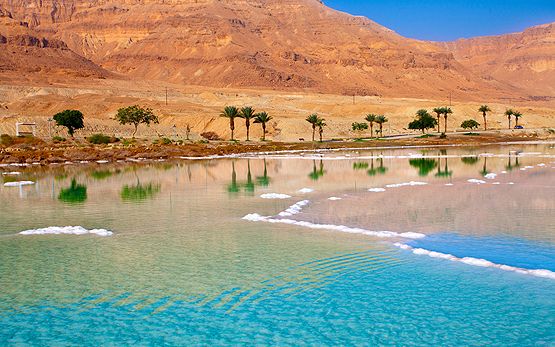 The Dead Sea is a thermal lake.

It loses high quantities of water which evaporates in the dry and hot air. As a result we obtain highly concentrated unique salt. There is specially high content of magnesium chloride, potassium chloride, sodium, calcium bromine and other chemical elements. Salt solution reflects the process of erosion and also recirculation of older layers. Deposits create precious mineral mud known as sludge used for medical purposes.

Unfortunately it is true…

Because the lake is situated at a very low level the water does not flow out. In the 20th century amount of water flowing into the Dead Sea decreased due to climate change and heavy exploitation by Israel and Jordan. Intensive evaporation leads to lower level of water and precipitation of salt. On a hot day it can evaporate even up to seven millions of tones- it explains why the lake does not expand. But contrary to water minerals do not evaporate that is why the is so basin.

It hides some mysteries…

About seventeen hundred years ago level of water was so high that it connected from the north with the Lake Tiberius. During decades it held different names: the Reeking Sea, the Devil Sea , the Asphalt Sea. In the Bible it was called the Salt Sea. According to the legend there are remains of ancient cities Sodom and Gomorrah at the bottom of the sea. It is also called the Sea of Sodom or the Sea of Lot-the witness of tragic scenes described in the Bible. There is an ancient Masada fortress near the Dead Sea and also place where the Qumran manuscripts were found.

Healthful values of the Dead Sea have been known for ages…

The Dead Sea region has been known for ages for its healthful values. Since ancient times people have taken advantages of this region. It is said that the queen of Sheba was the first to discover its amazing values. Even Cleopatra appreciated the advantages of crystal salt and sludge. In pursuit of secret youth formula the queen of Egypt founded the first pharmaceutical and cosmetic manufacture.

Its properties were known 4th century BC the Nabataeans used sea suspension to embalm the body. The ancient Romans known for its love for bath houses built hydropathical clinics where they used the water and mineral springs from the Dead Sea.

Even today we appreciate the natural effects of the Dead Sea…

The Dead Sea is extremely beautiful , picturesque spot, with specific yellowish shade of soil surrounding the lake contrasting with dark blue color of water. There is hot climate with numerous often blossoming trees.

Nevertheless, the most precious are the water and air values …

Minerals have very positive effect on blood supply to our skin it has also positive influence elastic and collagen fiber. The skin is much more elastic. What is more, the minerals have antiseptic and antibacterial effect on oily, dry and peeling skin. The Dead Sea salt contains natural minerals and it is known for its healthful properties against such disease like eczema, psoriasis, acne, atopic dermatitis and joint diseases.

Remember that knowledge + the power of nature of The Dead Sea is the base of our cosmetics.

" was added to wishlist

Become a part of our community!
Registration complete. Please check your email.
RegisterLost your password?

Recover your password
Password reset email has been sent.
The email could not be sent. Possible reason: your host may have disabled the mail function.
Log in Register
×